The Equality of Death

Some Reflections on the Bone Church

The Schwarzenberg coat of arms composed entirely of human bones in the Sedlec Ossuary outside Kutna’ Hora, Czech Republic. Notice the Turk’s head being pecked by a raven in the lower right quadrant.

I was able to check a box on my bucket list recently during a visit to the beautiful city of Prague in the Czech Republic. The famous Sedlec Ossuary, or “Bone Church” as it is more commonly called, lies a little over an hour outside the city. Sedlec has held an odd fascination for me since I became aware of its existence several years ago. I had come across some interesting articles while satisfying a morbid curiosity about Victorian Memento Mori, the unsettling yet irresistible art form of early post-mortem photography. Viewing such material has always left me feeling a bit ill at ease, as though I am looking through the keyhole, spying upon someone else’s grief.

It was what I expected to feel during my visit to Sedlec. But, coming in sight of the chapel, I was no longer sure. For one thing, it was much smaller than I had anticipated. For another, it seemed a bit kitschy from the outside. A skull and crossbones adorned the sidewalk leading up to the weathered archway, which, in turn, bore a poorly executed likeness of a skull. They’re trying too hard, I thought.

I continued into the dimly lit interior of the building and immediately felt my chest begin to tighten. There it was! That familiar sense of jarring strangeness–times ten. It was everywhere. Human mortality on a scale for which I was not prepared.  But as I walked around and took in the overwhelming number of skeletons (between 40,000 and 60,000), it slowly started to make sense. There was more here than simply the macabre. The anonymity of the individual became apparent. The skull I was looking at could have been a wealthy landowner or a pauper; a pious housewife or an unscrupulous merchant. Here, in death, it made no difference. Before God, we all stand as equals–without our titles, our wealth, or our lack thereof. His righteous judgement is based upon another standard altogether–a standard under which we all stand equally guilty. It was here, in the midst of all this death and decay, that I could appreciate anew the depth and breadth of God’s great mercy …”in that while we were yet sinners, Christ died for us.” For in the end, that’s all that matters.

For me, that is the lesson of the Bone Church. And it is one that I am unlikely to forget any time soon. 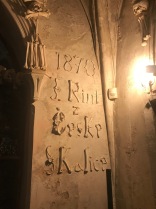 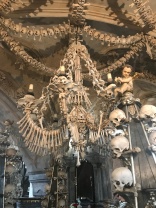 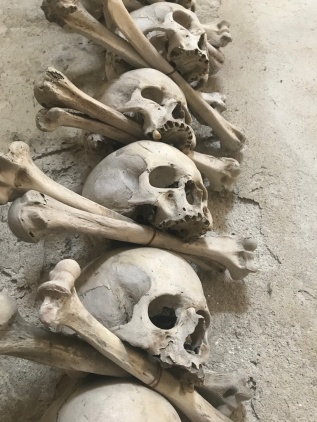 2 thoughts on “The Equality of Death”