The Medieval Concept of Time

Keeping Time in the Middle Ages 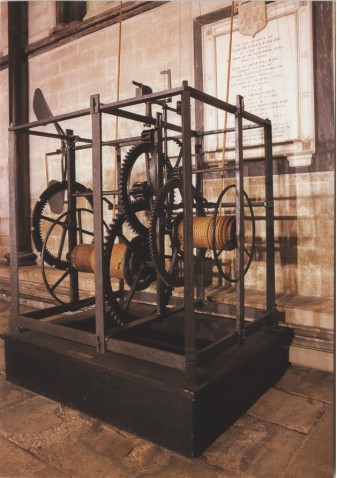 A good editor will often challenge an author to re-visit what he or she may think they already know about a presumed area of expertise. Such was the case recently when my esteemed editor, the erudite and talented Jamie Chavez, left me a margin note challenging my use of the term “minute” in a manuscript set in the mid-fourteenth century. My first reaction was to fall back upon the known etymology of the word as I knew that the term, as well as the current meaning, were well established by the late medieval period. A quick check confirmed my recollection but, trusting Jamie’s instincts, I decided to dig a bit deeper.

It turns out that she had good reason to raise the issue. Although I hadn’t employed the word in actual dialogue, my use of the term seemed to imply at least the character’s basic familiarity with its meaning. But as I quickly learned, very few people in the period in question would have found a practical use for the unit of time we now know as a minute. Until the widespread use of mechanical clocks in Europe (beginning in the late fourteenth and early fifteenth century) the concept of time was remarkably flexible.

Citing the words of Christ in John 11:9, (“Are there not twelve hours in the day?…”) Christian scholars concluded that the period between sunrise and sunset should be divided into twelve equal segments or hours—likewise with the nighttime period between sunset and sunrise. Utilizing this methodology, a 24-hour day can readily be divided into four quarters—two daylight quarters and two nighttime quarters. Estimating time in this way becomes relatively straightforward and intuitive. During daylight hours, at least, one always has three readily apparent observations that serve to establish a basic framework. In all but the most inclement weather it is a simple operation to mark sunrise, noon, and sunset. All other observations become merely subdivisions of these basic time periods.

Obviously, depending upon one’s latitude, these periods of daylight and darkness can fluctuate considerably depending upon the season. Only on the equinoxes (generally around March 20 and September 22) does one twelfth of the daylight hours equal one twelfth of the nighttime hours, i.e., 60 minutes. By contrast, on Christmas a daylight hour in London contains only 40 minutes, while a nighttime hour contains 80 minutes. These figures are reversed on St. John’s Day (June 24). So, in essence, for much of the medieval period a summer daylight hour was twice as long as a winter daylight hour.

Those most interested in precise time-keeping during the Middle Ages were the large monastic communities. Their disciplined lifestyles required a more accurate method of marking time than their secular neighbors. Their daily activities were highly regulated and adhered to a strict set of Liturgical Hours—a recurring cycle of seven (and later eight) communal prayer and worship services that took place throughout the day and night as follows:

Before the development of reliable mechanical clocks, the more common methods in use were water clocks, candles, sundials, and/or the employment of an astrolabe or quadrant to take readings from the sun or stars. It is likely that more than one technique was used due to the inherent limitations and inaccuracies of each method. Due to the expense and required technical expertise it is possible that many of the smaller communities may have simply left it to a designated time-keeper with a well-trained body clock.

One must suppose that, based upon each monastery’s method of time-keeping, these services would be held at varying times depending on one’s location and the time of year. Bells would have been rung to summon the community (with the exception of nightly Vigils) and the peasants, farmers, or townspeople living nearby would have conformed their time-keeping to that of the monastery. It is easy to imagine two farmers agreeing to meet on the village common following the None bell. 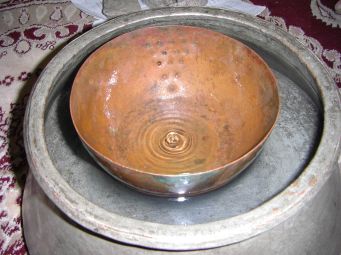 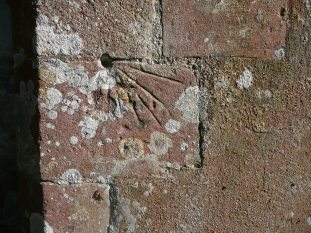 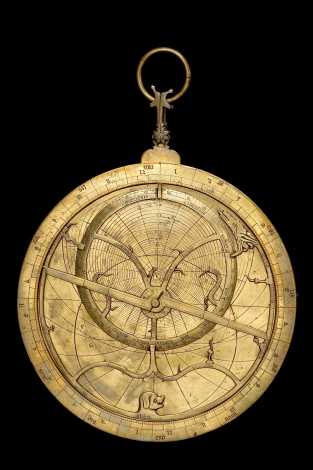 Likewise, it is also highly probable that in a large city like London or Paris one would have heard bells going off minutes apart all across the city as the various religious communities called their members to services based upon their individual calculations. And presumably no one would have been overly concerned about this inconsistency as time was not yet a commodity that could be readily bought and sold in easily defined increments. According to Jacques Le Goff in his book Time, Work, and Culture in the Middle Ages, the European religious establishment throughout much of the Middle Ages considered the very notion of the secularization of time to be sacrilegious. For time, much like the soul, was considered eternal and belonged only to God. Even as late as the fourteenth century a lector-general of the Franciscan order is noted as ruling:

“To the question: Is a merchant entitled to demand a greater payment from one who cannot settle his account immediately than from one who can? No, because in doing so he would be selling time and would be committing usury by selling what does not belong to him.”

Nevertheless, as time-keeping became more reliable and mechanical clocks more widespread, the push to commoditize time became irresistible. Throughout the later fourteenth and early fifteenth centuries merchants and craftsmen began to recognize their time as having incremental value. This notion quickly gave rise to such common practices as charging interest on outstanding debts and calculating the value of labor on an hourly basis.

The first literary reference we have of a mechanical clock capable of chiming the hours was from Dante’s Divine Comedy in 1319. It would be several decades before this presumably Italian innovation would reach right across Europe but it is fairly certain that by the beginning of the fifteenth century most European trading centers would have had one or more municipal clocks. The reliability of these clocks varied greatly and we have a reference in “The Nun’s Priest Tale” from Chaucer’s Canterbury Tales in praise of a rooster named Chauntecleer whose crowing was “…More regular…than is a clock or abbey horologe [bell tower].”

The oldest working example of such a clock is housed in Salisbury Cathedral (pictured above) and dates from around 1386. Interestingly, it has no face and was designed merely to chime the hours. The clock from Wells Cathedral, thought to date from around 1390, has a face but no minute hand. The earliest known reference we have to a clock with a functioning minute hand is in a manuscript from 1475. 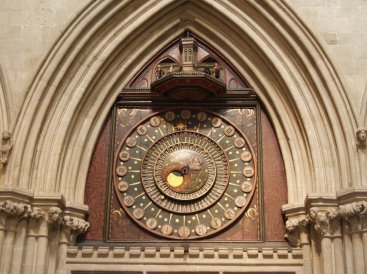 It seems likely that many of the monastic communities continued their traditional methods of time-keeping well into the fifteenth century, making it probable that there was considerable overlap. One can imagine residents learning to recognize the characteristic tone of each set of bells in order to distinguish “merchant” time from “liturgical” time.

So how would a medieval peasant beyond the sound of the bells of a monastery or town clock have reckoned time? In all likelihood he would have been more than happy with the results achieved by dividing the day into quarters as discussed earlier in this post. But for those who sought greater accuracy, Chaucer again provides us with some interesting clues regarding their methods. Chauntecleer, it seems had a particular facility for tracking the movement of the sun.

“By instinct he’d marked each ascension down,

Of equinoctial value in that town;

For when fifteen degrees had been ascended,

Then crew he so it might not be amended.”

The clever bird measured time by the progress of the sun across the daylight sky.

In a later passage from the Prologue of “The Parson’s Tale” Chaucer records,

“When his tale the Manciple had ended,

The sun from the south line had descended

So low that it was by my calculation

Not twenty-nine degrees in elevation.

The time was four o’clock then, as I guess,

For eleven feet (a little more or less)

My shadow was at that time and location

(Such feet as if my height in correlation

Into six equal segments would be hewn).”

Here again we see the use of the sun’s elevation in the sky with the additional device of comparing shadows against an object of known length. A picture emerges of the casual application of common wisdom to provide rough estimates sufficient to meet the level of perceived need—a thoroughly practical solution under the circumstances.

So, Jamie, it seems that your instincts were correct. During the mid-fourteenth century it would have been only a very small percentage of Europeans who would have understood or had a practical use for keeping time to the minute. Who knew? Thanks for pushing me on this point.

6 thoughts on “The Medieval Concept of Time”