How to Add a Touch of Class to Your Funeral

The Art of the Funerary Hatchment

Over the last few years most of my reading and writing has been set in the High Middle Ages; an interesting period in western history characterized in the public mind by its bold martial spirit and its love of flamboyant displays of chivalric spectacle. It is little wonder then that I have developed a deep fascination with the art of heraldry. Although my American sensibilities tell me that flaunting your family pedigree in such a public fashion is—at best—in poor taste and—at worst—exceedingly pretentious, I just can’t help myself. Despite my republican reservations I have grown to love it. So I was intrigued several years ago while watching the movie Nanny McPhee with my children when I noticed a very unusual coat of arms in the background. It hung on the wall of an office occupied by the undertaker played by Colin Firth. The arms were set in a square wooden frame which was not hung horizontally as would be expected. Rather, it was turned on its corner to create a diamond or lozenge shape.

From the film Nanny McPhee

This unusual placement was visually striking and I remembered having seen something similar a few years earlier in a small parish church in central England. After a bit of snooping on the internet I learned that what I had seen was actually a funerary hatchment, i.e., a painted representation of the coat of arms of the deceased set into a large lozenge-shaped frame. These heraldic displays were all the rage in the 17th and 18th centuries but by the close of the 19th had virtually disappeared.

During the Middle Ages, when a knight was laid to rest, it was customary to carry his shield before the funeral procession and then to hang it, along with his helm, crest, and sometimes even his steel gauntlets, in the church above his tomb. They were a symbol of his status and achievements—the accomplishments for which he had been known in life. 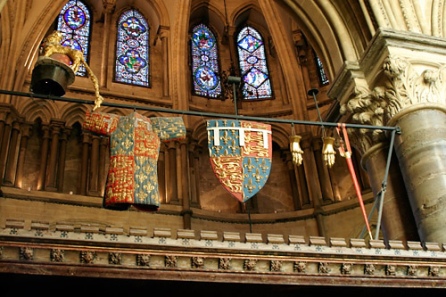 But as the use of plate armor declined and social status became independent of military service, families began to substitute a large painted panel containing the deceased’s coat of arms. It would be carried in front of the funeral procession and then hung above the front door of the family home for up to a year. At the end of that time it would be moved to the parish church as a memorial. This custom was primarily of English and Dutch origin, but was also practiced less widely in Germany as well.

Over time, strict heraldic conventions developed around the practice and the panels got larger—some reaching up to six feet wide. The arms of the spouse of the deceased began to be impaled, or combined, with the deceased’s arms, the husband’s always occupying the left hand side and the wife’s the right. As the size of the panels increased, so too did their weight. As a result, the solid wood panels evolved into stretched canvas set into a wooden frame.

One can easily read a great deal of family history from these hatchments simply by looking at the coloring, arrangement, and ornamentation. For example, if the painted shield is a conventional shape it commemorates the husband; if it is in the shape of a lozenge, or diamond, it commemorates the wife. A solid black background indicates that both spouses were deceased. If the left side has a black background and the right side a white background, it indicates that the deceased husband had left a widow. The presence of a skull, or death’s head, in the composition denotes that there was no male heir and the family line had been extinguished. 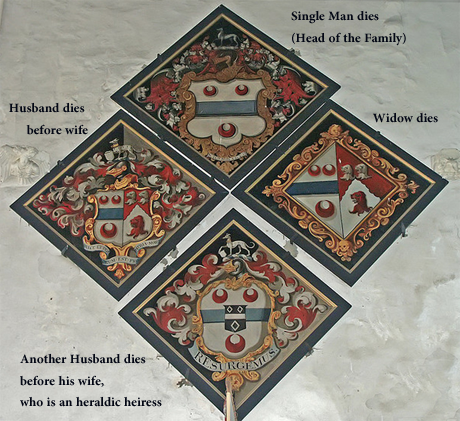 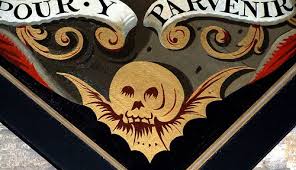 Death’s Head Indicating the Extinction of a Family Line

Although it is relatively rare for new hatchments to be produced today, a surprising number still exist from previous centuries. I actually own a rather small Dutch original from the early 19th century. Most surviving examples can be found scattered among parish churches across England. A few have substantial collections that cover a whole family, such as that of the Hulse family of Breamore in Hampshire, or the Saltmarsh family whose hatchments can be viewed in the Saltmarsh chapel at Howden in Yorkshire.

For a more detailed treatment of the subject, along with a wide variety of designs, click here. I have also established a board on Pinterest with some interesting examples that can be reached here.

So if you are looking for a way to add some class to your funeral, go take a peek and tell’em Jim sent you.